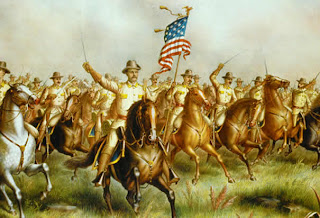 The advent of the film, Abraham Lincoln: Vampire Hunter leaves me hungry for more films like this and Cowboys & Aliens which blend history, fantasy, sci fi, and horror.  The use of historical figures as major characters is especially attractive, and is sure to beef up student interest in history, or at least in alternative history fantasies.  There we go...a unification of History and English in an attractive format!  We've now seen Abraham Lincoln as a slayer of supernatural creatures, so why not Theodore Roosevelt vs. The Zombies?--Dang!--I think I'll write that!

Scenario:  "In a post-apocalyptic early twentieth century world, human civilization stands on the brink, close to going under.  Only one group stands between humanity and hordes of flesh-eating zombies:  Teddy Roosevelt and The Rough Riders!"

Teddy Roosevelt vs. The Zombies...coming soon to a theater near you!

Posted by vulpesffb at 8:21 AM No comments: